Great Britain has a wonderful history when it comes to watch making and has probably been the home to more advances in horology than any other nation. Bremont is determined to play a pivotal role in the reinvigoration of this industry on British shores.

Our goal has always been to bring back as much of the process to the UK as possible and our watches are all designed, manufactured and assembled in England. That includes most of the bespoke parts used in our limited editions, as well as our hand-made leather packaging.

Bremont is making considerable investment in its UK watch making and manufacturing and in 2014 launched a new facility in Silverstone to produce case and movement components. Building on a significant in-house watch making knowledge, together with experience from the F1 industry, the facility is located at Silverstone to capitalise on local transferable skills in the CNC and machining space.

This is part of a long staged investment programme and has seen Bremont invest in some state-of-the-art CNC mill-turning, metal cutting and finishing machinery, some of which are the first of their kind in this country. This investment will enable Bremont to manufacture significant quantities of beautifully engineered and finished watch parts on British shores. Alongside Bremont’s Henley based watch assembly facility, Bremont’s Silverstone facility offers the best foundation for growth.

Our British watch making facility is located in Henley-on-Thames, South Oxfordshire. A beautiful oak-framed building in the heart of the Chiltern Valley, it has been custom built for watch manufacture. Our long-term staged investment programme is aimed at developing watch making expertise in the UK. All of our key movement and case components are assembled and finished in Henley.

It may surprise you to know that watch making is a very British trade. Every major escapement design and around three quarters of related innovations came from these shores. Much is owed to Thomas Tompion (1639-1713), the ‘Father of English Clock-Making’ and the remarkable Thomas Mudge (1715-1794), who invented the lever escapement still used in most watches today. John Harrison (1693-1776), meanwhile, solved the problem of accurately telling the time at sea and by doing so, in calculating longitude as well. They were followed by other illustrious names including John Arnold and more recently, George Daniels.

Bremont is built on precise timekeeping. Only the highest quality components are used in our movements. Every watch bearing the Bremont name is chronometer tested, then further subjected to a rigorous quality control programme.

The results are all documented in detailed records securely stored at our headquarters. The only exceptions are some of our limited edition pieces, for which a stringent testing programme is well inside the C.O.S.C parameters. It goes without saying that their movements contain chronometer specification parts. Every watch in our core collection is accompanied by a performance certificate issued by the ‘Contrôle Officiel Suisse des Chronomètres’ (C.O.S.C). The certificate confirms that the mechanical movement has passed each of the rigorous precision tests necessary for the chronometer designation.

Bremont focuses purely on beautifully made mechanical movements. Each one is finished with the highest levels of craftsmanship, whether in a clear-backed case or not and all are guaranteed to within -4 and +6 seconds per day. For this reason Bremont is one of the few watch makers to offer a 3-year warranty on every timepiece. Bremont produces some of the finest quality watches in its price point. 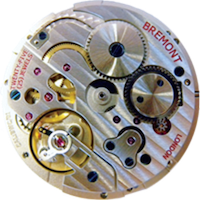 The BWC/01 has been part-developed and designed in Britain with our Swiss partners. A number of the key constituent movement parts are also manufactured at the company’s workshops in the UK, which is the first step for Bremont towards manufacturing movements in their entirety on these shores.